#CnnGetItRight: An analysis of 10,000 tweets

Ghana’s December 7th general election received a lot of media attention both locally and internationally. It was generally an incident-free event and this has been the case in Ghana since we switched to democratic rule in 1992. Ghana’s democracy remains an enviable example to other countries in Africa because of how smoothly power changes hands without military intervention or violence. We thank God for this.

CNN published an article on the elections in Ghana titled ‘Ghana election: Incumbent concedes to Nana Akufo-Addo’. In the article, Ghana was portrayed as a nation in crisis due to the challenges in the energy sector and other sectors of the economy. The article further stated that Ghanaians struggle to obtain food and queue for products. This part of the write-up was received with a lot outrage on twitter. Ghanaians on twitter came up with the hashtag #CNNGETITRIGHT to vent their frustrations about the misrepresentation of their beloved country. The protest made the desired impact as CNN edited the said article. The many who downplay the power of social media, social media activism and hashtags, would have to change their minds after this incident. Social media has given a strong voice to the voiceless to demand for the right things to be done.

Code for Ghana fellow Nana Baah Gyan conducted a research to discover the extent to which the #CNNGETITRIGHT hashtag was used. The research involved the text mining of 10,000 tweets and doing a sentiments analysis. The word cloud above reveals the most popular words used along with the hashtag – the larger the font the more recurrent the word was. Also, in the word cloud we see a few popular Ghanaian twitter users that tweeted with the hashtag. These are @garyalsmith and @amoapho. The first lady of the country (@firstladyghana) also tweeted with the hashtag . It is reported that renowned journalist, Gary Al-Smith (@garyalsmith) started the hashtag. A close look at the hashtag reveals ‘Ghanaians’ as one of the most popular words used in the online protest. This is because the word was spelt wrongly in the article – in the article it was written as ‘Ghanians’. In short, the article was inundated with so many errors.

Below is a bar graph that also reveals the most popularly used words with the hashtag. 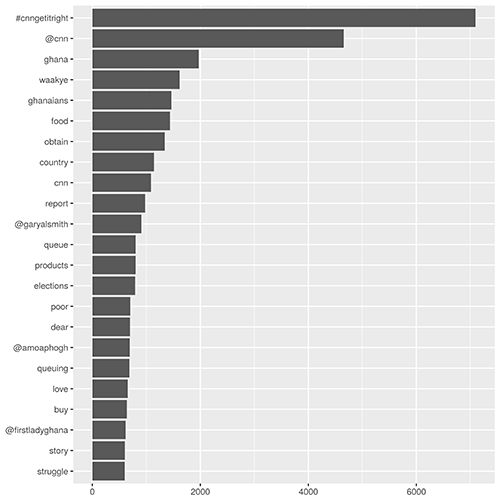 Though Sunday 11th December, 2016 was when the euphoria surrounding the hashtag heightened, there was a spill-over into subsequent days. Below is a histogram revealing how many tweets were recorded within 24 hours from 00:00 am 12th December to 00:00 am 13th December.