A few months ago the Inspector General of Police - COP John Kudalor - stated that the Police service in Ghana is considering banning social media on election day later this year. The news was received with a lot of rage by a section of the general public. Even some prominent political figures expressed their displeasure at the news.

In this year alone, Uganda has banned social media twice. The first was on February 18th when social media sites were blocked for 48 hours. The second ban took place quite recently during the swearing in of President Museveni for his fifth term in office. According to the Ugandan Communications Commission (UCC), the ban on the use of social media was for security reasons. Could it be that our security forces are merely taking a cue from their Ugandan counterparts to deprive citizens of their freedom of expression?

Certainly, social media has become an essential part of the lives of most people all over the world. People interact with online followers; share their views on pertinent national and global issues; some also sign in to these sites just to read news. Several media houses have a strong social media presence. Therefore, instead of waiting for the news at 12 pm to get the details of a breaking news, social media enthusiasts can just sign in to their accounts and read the news - sometimes, even share their views and engage with others. Just like any tool, social media can be abused. It has indeed been abused in so many ways. The various sites have embedded features that will enable users to report bad posts from other users. The consequences include a permanent removal of that post or a permanent deletion of the culprit’s account. No matter how stringent these measures may appear, they cannot undo the harm that might have been already done. Especially if it involves the dissemination of false news or derogatory remarks about a person. Millions of people throng these social media platforms for information, so once something is posted, even if deleted at a later time, some degree of impact would have been made already.

Below is a visualization of the number of Ghanaians who use the internet and facebook. 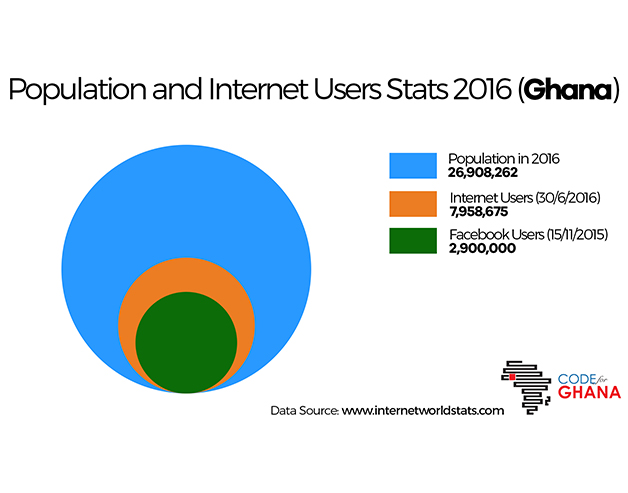 Social media can also be used as a tool for advocacy. Just last year, we saw how some celebrities in the country used a hashtag on twitter to mobilize people to protest against the government’s inability to solve the power crisis. Social media is a very powerful tool; it is also a dangerous one. This is because, unlike traditional media, there is very little regulation on social media. Therefore, it can be used to stir people up to engage in violent acts before, during and after the elections. I am tempted to believe this is the reason why the IGP is considering banning social media on election day. However, doesn’t this infringe on the rights of citizens to express their opinions? We thought of this and decided to run a poll on twitter to find out people’s opinions on the issue. 99 people voted and from the results: 79% of the people who voted didn’t agree with the IGP, 10 % did and the other 11% just didn’t care.